With the above material: 5-round circle = 5cm (2″). Find out how to measure gauge for amigurumis in my tutorial here.

With the material mentioned above and when gauge is achieved: 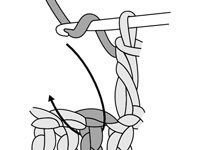 THE LEGS AND BODY

Embroider the nose with DMC cotton perle black thread. I strongly advise to embroider the upper part of the nose before stuffing and attaching to the head, it’s much easier, and less messy in case you need to undo and redo. First embroider the edges as guides, then fill inside, vertically.

The Pom-Pom : very soon I’ll publish a tutorial to make the pompom yourself. Otherwise you can just buy a pompom from the size and colour of your choice!

To make the bag clasp

With DMC happy cotton shade 777 (brown) and a 2.5mm hook, make a slip knot, leaving a tail for sewing. Chain 4, fasten off leaving a long tail for sewing. With the tail, make a small loop (to form the buckle) and make a knot around the 4th chain to secure the loop. Hide the tail back along the chain. Sew to the top of the bag flap in the middle, and hide yarn tails inside.

Take another piece of brown yarn, and with a tapestry needle, insert it in the middle of the bag between round 5 and 6, from inside the bag to outside. Make an embroidery knot point: wrap your yarn 5 times around the tip of your needle, and insert your needle back into the same hole, pull delicately. Secure the yarn tails inside the bag by sewing them inside.

To make the bag strap

With DMC happy cotton shade 777 (brown) and a 2.5mm hook, make a slip knot, leaving a tail for sewing. Chain 40, fasten off, and sew to the sides of the fishing bag, halfway up the sides. When sewing, grab the 2nd or 3rd stitch of the strap so that the straps stick to the sides of the bag.

PS*: This accessory doesn’t need to be attached to the body for assembly, you can just slip it on after assembly, from the feet.
PS**: before fastening off, adjust the number of chains to obtain the length you like if needed.

I strongly recommend to use ball point pins for assembly. This way you are sure your piece won’t move during sewing and you save a lot of time and frustration.

1) Embroider the upper part of the nose.
2) Sew the nose to the head (the top of the nose should be sewn between round 9 and 10.
3) Sew the ears to the head (the top of the ears are sewn between round 4 and 5).
4) Attach the head to the body (with the bear belly on the front).
5) Sew the arms to the body between round 19 and 20.
6) Embroider the claws on the paws, and embroider the end of the nose and mouth (it’s easier to see the global expression of your amigurumi once it’s fully assembled, I usually do the smile last cause it’s really important and can change the whole look!)
7) Find a fine piece of wood to make the rod and attach a string to make the line.
8) Attach a fish to the end of the line, and put another fish inside Bruno’s bag. Insert the rod through a stitch of the hand (or attach a string of yarn to the rod and sew it to the hand)
9) Put on the beanie, scarf and fishing bag (slip it on from the feet), and here you go, Bruno is gone fishing!

View all posts by yönetici